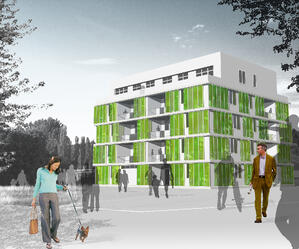 How do the micro-algae generate electricity?

In addition to providing solar shading, the bio-adaptive facade generates electricity. The micro- algae use the energy from the sun to produce biomass, which can be harvested and converted into energy.

Jan Wurm, Europe Research Leader at Arup, says "As well as generating renewable energy and providing shading to keep the inside of the building cooler on sunny days, this system also creates an interesting appearance that many architects and building owners will like. It is a valuable method for generating renewable energy, whilst providing effective solar shading which itself keeps cooling loads down".

How has the technology been developed?

The bio-reactors are being fabricated by Colt, based on bio-reactor technology developed by SSC Strategic Science Consult. Arup is providing concept design, coordination and engineering. The BIQ House project is due to be completed in March 2013. Once it is ready, it offers up a fantastic opportunity to assess the potential of micro-algae in future development.

To find out more about the latest news and developments, visit our news page.