NO₂ vs CO – what you need to know?

Not all vehicle emissions are made equal. First, the pollution created in buildings by cars, vans and lorries must be detected. Once detected, we must understand which pollutants will be present in the air as a result of how the building is used. A qualified engineer can then install the optimal system to avoid the health risks associated with Carbon Monoxide and Nitrogen Dioxide.

In this post, we will outline the dangers of carbon monoxide and nitrogen dioxide. Then we will explain how the type of motor vehicle that is within an enclosed space is used to determine which detectors are used. We also share some examples of projects that have involved Colt engineers installing detectors. We conclude the post by comparing Euro 6 diesel and petrol engines.

The dangers of Carbon Monoxide and Nitrogen Oxides

In such areas, ventilation is needed to control the build-up of vehicle exhaust fumes or spilt fuel when the facility is in general use. Potentially lethal concentrations of CO and NO2 can build up quickly, without exposed individuals have any indication of danger.

The tables below illustrate the impact that these gases have if they build up within an environment: 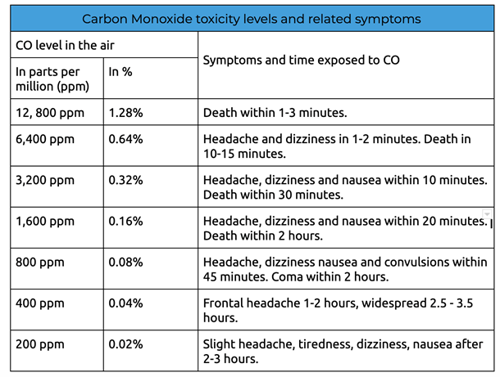 Carbon Monoxide is commonly referred to as the silent killer, as it is colourless, odourless and tasteless.

It is a product of incomplete combustion. This occurs in internal combustion engines however, CO is present in varying degrees in all vehicle exhaust systems.

Diesel engines operate at a higher temperature and pressure than petrol engines. These conditions favour the production of NOx gases, hence emissions are higher for diesel engines.

The type of gas detected determines which type of detector that will be used.

If the vehicles in an enclosed space such as a car park predominantly have diesel engines, NO₂ detection is used.

Therefore, it is a better representative gas for levels of engine exhaust emissions / indoor air quality than CO. For example, If you measure for CO when vehicles are predominately diesel, it would show low or acceptable levels, so you do not ventilate, all the while the levels of NO₂ are high and undetected causing harm to occupants.

Depending on the scenarios, we may use either NO₂ or CO detectors, or a combination of both. This will be determined by your engineer.

Euro 6 is a set of limits for harmful exhaust emissions produced by any vehicle powered by petrol or diesel engines. Since September 2015, manufacturers have been ensuring that new car emissions do not exceed the limits.

In 2019, the Euro 6 standard became more popular as it encapsulates the criteria regarding the new ultra-low emission zones (ULEZ) and clean air zones (CAZ)

In these new zones, any diesel vehicle that doesn't meet the Euro 6 requirements will be subject to a daily charge when driving in the city centres. This is an effort to improve air quality.

Furthermore, diesel engines operate at a higher temperature and pressure than petrol engines. These conditions favour the production of NOx gases, hence emissions are higher for diesel engines.

Thanks for taking the time to read this post, for more information, check out our FAQs on car park ventilation.

To find out how these units could help improve your working conditions, a survey of your factory is needed to assess your current situation. At Colt, our engineers have been working with building owners and operators solving their problems related to the indoor environment and helping improve their business for over 30 years.

Laurence Cockman is a Technical Manager for Colt UK Climate Control Division and specialises in the design and product application of energy efficient HVAC systems.