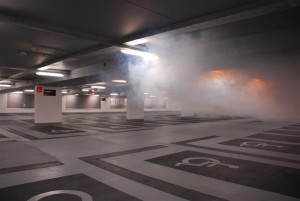 At our recent webinar with guest speaker, John Klote, we had a large attendance with many questions asked. Here you can find John's and my answers to these questions, slightly edited for clarity.

If you missed the live webinar, then a recorded version is available here.

1) What is an axisymmetric plume?

2) How accurate do you believe the equations are in NFPA 92 for axisymmetric & balcony smoke plume calculations?  Would they be valid for very tall atria, say greater than 10 storeys?

John: I am using the term “atrium” for this webinar in a generic way to mean any large volume space such as a multi-story shopping mall, sports arena or airplane hangar. The mass flow equation for axisymmetric plumes used in NFPA 92 is based on research by Gunnar Heskestad at Factory Mutual in the US.

Another empirical equation was developed by McCaffrey at the National Institute of Standards and Technology in the U.S. However, much of McCaffrey’s experimental work was done as a guest worker at BRE in a facility in Cardington, Bedfordshire, that had been an airship hangar. Because the former airship hangar had a very high ceiling, it may be possible that McCaffrey’s equation is better for tall spaces than that of Heskestad. However, the difference between these equations may be academic. As a plume rises, it pulls in air from the surroundings causing the mass flow of the plume to increase with height and the plume temperature to decrease with height. All the plume equations are for strongly buoyant plumes. NFPA 92 indicates that the plume equations are not to be used when the temperature rise of the plume above ambient is less than 4°F (2.2 °C). Provided that this plume temperature condition is met, the mass flow equation in NFPA 92 yields appropriate results for smoke control design regardless of atrium height.

3) When would you say that CFD analysis necessary and zone models/smoke plume correlations may not be valid?

John: Both the zone fire model approach and the algebraic equation approach can be used for atrium smoke control analysis, provided the conditions of these approaches are appropriate for the application. It should be noted that both approaches have assumptions that tend to yield conservative designs. The conditions fall into two categories of geometry and empirical equations. The geometry conditions of both approaches are (1) that the atrium ceiling is nearly flat and (2) the cross-sectional area of the atrium is nearly constant with height. Because different empirical equations can be used for these approaches, it requires knowledge of the specific empirical equation to determine if the conditions are appropriate for a particular application.

Either CFD modelling or scale modelling should be used when the conditions of the zone fire model approach, or the algebraic equation approach, are not appropriate for the application. While scale modelling is not used much for design analysis, designers should remember that it has the advantage of being able to model real smoke flow from a real fire in a scaled down version of the actual atrium.

CFD modelling is capable of more realistic simulations than those of the zone fire model approach or the algebraic equation approach provided the CFD simulations are properly done. I started using CFD models over twenty years ago, and I have used the FDS model for atrium smoke control analysis extensively. If properly used, CFD modelling often can result in atrium smoke control systems that are less expensive than those analysed with an approach based on the conservative assumptions mentioned above.

4) In practice 1m/s is hard to achieve for makeup air. In the UK the limit normally used is 5m/s and in Australia 2.5m/s. What's the reason for the 1m/s limit in the US?

I was of the impression that the 1m/s requirement is near the fire area. I am having trouble when I am sizing louvers as make-up air because the selections typically range from 3m/s to 5m/s.

What is the maximum inlet velocity for make-up air (in louvers for example) recommended for smoke control applications?

There is also a concern about increased fire spread due to airflow. Airflow causes the flame to bend resulting in increased fire spread and fires possibly larger than the design fire. ASHRAE is funding another research project at the University of Maryland on airflow velocity in the region of the flame, and this project is addressing fire spread to some extent. In fully sprinklered buildings, air velocity is not a concern in one story spaces that open to the atrium, and these spaces open to the atrium are called communicating spaces. For a makeup air inlet in a communicating space, the velocity can exceed 1 m/s provided that when the air reached possible fire locations in the atrium space it decreased to 1 m/s or less.

Paul: 3 very similar questions here I’ll answer together. I can’t comment on the Australian velocity as I don’t know its basis. The limit in the UK is for the velocity through escape routes. It’s set to ensure that the incoming air velocity does not exceed 5m/s so that it doesn’t impede escape (even in a worst case condition when the doors provide the majority of the inlet air and are partially blocked by people this means the inlet velocity should not exceed 10m/s). It’s generally taken as the design limit for any inlet ventilators. The limit in the US is for the velocity at the plume. It’s set to limit the influence of the air flow on the plume as excess velocity could cause the plume to lean and could cause excess air entrainment. In fact a similar recommendation is included in the British Standard, BS 7346-4, as well, relating to air flow under the smoke layer.

John: This is an interesting idea that could simplify design fires analysis. For example consider an ordinary hazard space. A design fire for such a space could be based on a severe successfully sprinklered fire that could happen in an ordinary hazard space. Such a severe design fire may not be the absolute worst of all possible fires, but it should be a fire that would only be exceeded in very unusual circumstances. Possibly the severe design fire would be a shielded fire. Determining such a fire with confidence might require research. Currently in the US, the design fires are based on the anticipated fuel (normal and transient) in the space which is determined by an engineering analysis. The design fire from the anticipated fuel could be less than that based on sprinkler hazard classification, but this would result in a conservative smoke control design. Of course design fires based on sprinkler hazard classification would need an exception for atrium (or atrium like) spaces where the benefit of sprinklers should not be taken into account.

6) Hello, Thank you for the presentation, my question is do we have like standard of a typical / common building?

John: There is no standard of a typical or common building. Architects tend to design buildings that are unique and anything but common. When doing computer studies involving smoke flow, I have tried to select buildings that have some common characteristics with other buildings. More than once I have cautioned engineers to be very careful when trying to generalize the results of such studies because of the wide variety of buildings that exist.

7) Unsprinklered 11m high theatre with transient fuel on stage? As the transient fuel may be set up differently during each performance, how would you recommend calculating a design fire?

John: I have done an analysis of design fire on the stage of a theatre, but this analysis should be much like the design fire analysis for many other spaces. The objects that can burn often are moved around by the occupants, and there can be a wide range of transient fuels. Typically the likely fuels are evaluated to determine a severe design fire.

8) How do you determine the HRR for an unsprinklered warehouse?

John: I have not done an analysis of the design fire for an unsprinklered warehouse. If the design fire is not prescribed in the code, I would start by asking what other engineers have done.

9) How can we calculate unsprinklered steady fires? If they are twice like sprinklered, then are they 9x9 or 3x3x2?

Paul: In the Smoke Ventilation Association guidance it is the area that is doubled. If a sprinklered fire is assessed at 3m x 3m, i.e. 9m2, the unsprinklered design fire would be 18m2 or 4.25m x 4.25m. The HRR per unit area is unchanged so the total HRR also doubles.

John: In fire experiments in one story spaces, the sprinkler spray can push some of the smoke down to the floor. In videos of such fire tests, this can even look like the smoke layer drops to the floor. In the US, it is considered much better to supress the fire with some smoke near the floor than not to suppress the fire. When sprinklers activate in an atrium, such smoke mixing may not happen. Full-scale fire tests with sprinklers conducted at the BHP Laboratory in Australia by Bennetts in 1997 showed that sprinklered fires in a space open to an atrium can produce buoyant smoke that flows out of the space and upward to the ceiling of the atrium.

Paul: In the UK this is treated as a local effect and ignored.

11) Is water mist outside of this presentation?

12) I understand Colt in the UK performs CFD for corridor smoke ventilation...is there a range of typical published design fires used in this CFD analysis?

Paul: For residential buildings there is a free design guide from the Smoke Control Association which provides some guidance. The BRE reports on the development of their natural shaft systems also provide useful design conditions.

13) In car HRR curves that come from research you often see a long incubation period before the fire starts growing rapidly. For CFD application of such curve, would you skip this period of slow burning, as it largely depends on random factors or would you include it in your CFD calculation? This is a big issue as it will largely influence Available Safe Evacuation Time calculation.

John: Because nothing relevant to smoke control performance is happening during the slow burning incubation period, I would not include it in the CFD simulations for smoke control analysis. However, I would note that this was done in the report of this analysis. If I was calculating the available safe time for evacuation, I would use a zone fire model like CFAST to calculate sprinkler activation time. The design fire for the CFAST simulations would include incubation period.

Paul: Personally I’d skip this incubation period in the CFD analysis as it will increase the calculation time for no great benefit, but I’d include it in any ASET/RSET analysis.

15) I would like to thank you for this presentation. Furthermore, would you give a presentation (sometime in the near future) on this same subject, related to smoke control in car parks?

John: The most recent research involving fires in car parks (called parking garages in the US) that I am aware of was done at the British Research Establishment (BRE) in the UK by Shipp et al. published in 2006 and 2010, and there has been much earlier work on this subject. While I could give a presentation about car parks, I suspect the there are people in the UK who might be more appropriate.

This webinar can be viewed as a recording by following the link below, where you can also view the PowerPoint Presentation created by John.

Our webinar calendar lists all upcoming events as well as a library of all webinar recordings. Most are CPD accredited, enabling you to to claim a CPD certificate after watching them.