Smoke and fire curtains. What they are, how they work and the UK regulations surrounding them.

What are smoke and fire curtains?

Smoke and fire curtains are both components that can form part of a fire safety system, but there are distinct differences in their roles and how they operate. 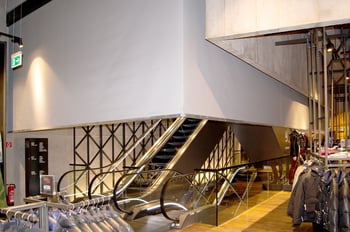 Smoke curtains are used as part of a smoke control system to control the flow of smoke between areas. They are typically used as a channeling screen or a smoke reservoir screen. Smoke curtains are only exposed to smoke, and as such are only rated to 600°C. As they are mainly used to channel smoke, they usually remain above head height and do not drop all the way to the floor when they are activated.

Typical applications where smoke curtains are used could be in buildings with balconies or atriums, providing the ability to safely contain smoke in the open-plan or ‘common’ areas
of the building, where it can be drawn out by roof vents. This allows occupants to escape safely in the smoke-protected areas behind the curtains. Smoke curtains are also often used to create smoke reservoir boundaries or as channeling screens.

Smoke curtain testing and regulations in the UK

Smoke barriers must comply with BS EN 12101-1 and be CE marked, as well as be rigorously tested to ensure they comply with the approved performance standards:

Testing aspects for smoke curtains include:

The choice between gravity descent or powered descent is permitted, however, standards introduced in 2014 stated that all smoke and fire curtains must have a gravity fail safe, which will ensure the curtain descends regardless of a loss of power.

Where automatic smoke curtains are installed, these are not designed for daily use and the 1,000-operation life cycle test represents 20 years of testing. The curtains should be tested once a week, but annual maintenance is considered sufficient for these systems.

Where there are building limitations or if designers want to be a bit more creative, fire curtains can replace other conventional fixed elements that are normally used for fire safety. This is because fire curtains are flexible fire-rated barriers that are held out of sight in a headbox until needed. When activated by a fire alarm system, a fire curtain will automatically drop down between guide channels to seal the space where a wall and door would normally have been.

The compartmentation provided by these fire-resistant curtains helps to:

Fire curtains can be perfectly integrated into the building’s design so that when they are rolled up, they are virtually invisible.

Common uses for fire curtains are as direct replacements for fire doors or shutters, to protect lift doors to protect means of escape in open plan buildings, to protect service shafts and to allow escape along narrow atrium balconies.

Fire curtain testing and regulations in the UK

Fire curtains should comply with BS 8524-1:2013 but, unlike smoke curtains, gravity descent is required (including a gravity fail-safe in the event of loss of power, as mentioned earlier).

Automatic fire curtains can be designed for daily use, but most are designed for emergency use only. Reliability classes from 0 to 200,000 cycles are available in BS8524-1 – most curtains are likely to be rated C1 (500 cycles).

If you need help incorporating smoke or fire curtains into your building, talk to our experts or learn more about Colt’s smoke and fire curtains.

Conor Logan is Associate Technical Director of Colt UK, Smoke and Climate Control Division. Conor designs innovative smoke control and HVAC systems and was Chairman of the Smoke Control Association for over 9 years.