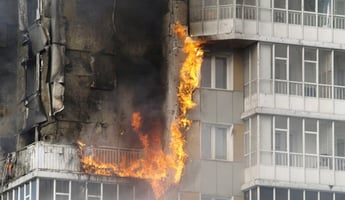 There’s no fire without smoke

In the early stage of a fire, the smoke produced will come from the first items that are ignited; often furniture or electrical appliances. As the fire grows the volume and toxicity of smoke greatly increases. Without smoke control, the smoke will travel and spread through the building quickly, making escape far more difficult (due to lack of visibility and smoke inhalation), trapping people inside the building. Before the fire hits flashover point (when the contents of the room or space suddenly and simultaneously ignite), the smoke becomes extremely thick and black. This smoke has a very high temperature and is extremely toxic, in other words, it is potently deadly.

Why is Smoke Inhalation so dangerous?

Smoke inhalation can worsen quickly and affect more than just your respiratory tract.

1. Smoke inhalation results in three types of physiological injury:
Systemic effects of the toxic gases such as carbon monoxide (CO) and cyanide (CN) that can result in asphyxia (suffocation).
Early deaths in a fire are predominantly due to asphyxia. Asphyxia from CO toxicity is the main cause of rapid death among the victims of fire. This is caused by a lethal synergistic effect of low oxygen levels (due to massive oxygen consumption during combustion) and inhalation of high concentrations of CO and CN from the smoke (resulting in the body being unable to use oxygen at the cellular level).
After a few minutes of low oxygen levels, a person becomes unconscious. When oxygen levels are significantly low for four minutes or longer, brain cells begin to die and after five minutes permanent anoxic brain injury can occur. After seven minutes, fatality occurs.

2. Thermal injury predominantly to the upper airway.
The heat from the smoke physically burns the mucous membranes of the airways (nose, mouth, trachea and bronchioles). Not only is this extremely painful, it damages the respiratory tract, causing swelling and potentially airway collapse.

3. Chemical injury to the upper and lower respiratory tract.
The combustion of furniture/appliances etc causes chemicals to form that injure your skin and mucous membranes. These chemicals are carried in the smoke and damage your respiratory tract, causing swelling and airway collapse. Ammonia, sulphur dioxide, and chlorine are examples of chemical irritants in smoke. These, and other compounds in the smoke cause cellular damage in the body by interfering with the delivery and use of oxygen and neurotoxicity (damage to the nervous system).

The chronic effects of Smoke Inhalation

For non-fatal smoke inhalation injuries, there can be long lasting damage:

The information above makes it clear how absolutely necessary it is to keep escape routes and staircases clear of smoke.

Smoke control (rather than smoke clearance) is designed to help during the actual event of a fire. It is designed to remove and restrict the movement of smoke while the fire is still burning, thereby assisting occupants with a safe escape.
It primarily does this by extending the amount of time that a building’s occupants have to safely evacuate, without being overcome by the affects of the smoke (asphyxia, thermal and chemical respiratory injury), thus saving lives. Smoke ventilation systems remove heat from the building, limiting the number of sprinkler heads that operate to those directly above the fire. Therefore, the two will work best when they have been designed to work in conjunction with each other. It is not advised to rely one just one or the other as a fire safety system.

At Colt, we take a conservative approach to designing our systems to suit the project and this may be by basing them on the assumption that a fire would have grown to its peak and stays there throughout its duration. Thereby we know that our systems are robust enough and will keep smoke above people’s heads the whole time.
Whether designing, installing or maintaining smoke control systems, compliance and competency is critical to the successful deployment of the system should a fire occur.