Insulated Fire Curtains and PAS 121 - In the Zone? 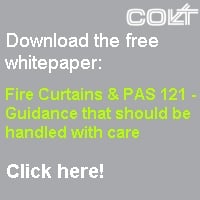 Publicly Available Specification (PAS) 121 has sparked some confusion as regards the difference between an insulated fire curtain and an insulated zone fire curtain. Hopefully in this blog and whitepaper we will be able to remove the confusion from the subject.

EN1363-1 provides guidelines on fire resistance testing. After thermocouples have been attached to the fabric and around the perimeter of the fire curtain the unit is exposed to temperatures as detailed on the chart below. 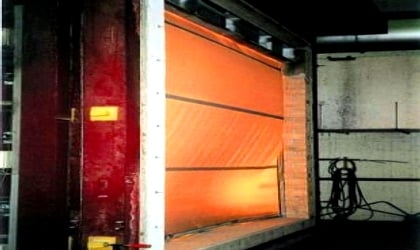 When conditions greater than items 1 or 2 are achieved, the time is recorded and the curtain is classified to the length of time it kept within the parameters, for example EI "XX".

EN1363-1 is very specific on the type, fixing, and location of the thermocouples. During testing the flexible fabric intumesces, which means that the surface temperature of the fabric cannot be accurately measured, therefore the curtain cannot be categorised as having insulation properties in accordance with EN1363-1.

There has been a recent attempt to solve to this testing problem by holding the thermocouples at a distance away from the fabric. These tests are detailed in the Publicly Available Specification (PAS) 121. This curtain is being called an insulated zone fire curtain.

In effect all this test proves is that if you go far enough away from an insulated zone fire curtain the temperature limits above will be met, i.e. outside the insulated zone. It has not been tested as described in EN 1363-1, therefore it cannot be classified as an insulated fire curtain.

For further information on this subject download our “Fire Curtains and PAS 121 whitepaper” which explains why the PAS 121 guidance needs to be handled with care.