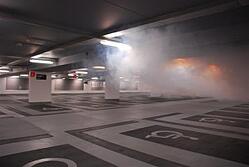 At our recent webinar on car park ventilation, we had a large attendance with many questions asked. Here you can see my answers to these questions, slightly edited for clarity.

There is also a recording of the webinar available. Watching the recorded version will still enable you to claim CPD points.

If using impulse fans, how much natural vent do you require as a minimum to allow dispersal of the smoke to outside?

There are two conditions when we use impulse fans:

One is with a full mechanical system and there, the ventilation to outside for the extract from the extract fans is calculated using normal H&V calculations, and the sizing is a balance of the power of the fan versus the cross section of the system.

If we are using impulse fans together with 2.5% floor area of ventilation, then the ventilation area is simply defined as the 2.5%.

That reminds me that one thing I did not talk about was the air inlet to these systems. Generally this is natural unless we have multiple storeys and we would aim to keep the inlet velocity below about 2m per second in day to day usage simply to avoid excessive draughts.

Yes, it is commonly used and there is no problem at all combining the two.  We have quite a few systems where, in a large car park, we use the induction fans for the main areas and a few smaller impulse fans for subsidiary areas.

These are roof beams below the soffit, which are part of the structure of the building used to support the floors above.

What kind of system would be required in a basement car park with a fully automatic self-parking system, stacked three cars high?

If you have a fully automatic system, then normally you have nobody within the car park other than for maintenance, and generally the ventilation requirements are more geared around fire-fighting, irrespective of whether the fire fighters are just going to stop the fire spreading outside that area or whether they are actually going to fight the fire within the area.  Very often if you have fully automated stacked systems there is going to be a specially designed sprinkler system in there to keep the fire size to a minimum size. If you are looking at protecting people (fire fighters) in there, then it’s got to be a full smoke control system.

What should the frequency of testing of ventilation systems be?

That is generally covered by the Regulatory Reform Order in the UK.  If they are purely for smoke clearance, the systems can be tested when you maintain them once a year and then perhaps two or three times in between just to make sure everything is ok.  If the system is a smoke control system then it should be tested every week and properly maintained once a year.

Will the videos be available to watch again?

The videos used in the presentation are available on our YouTube account and can of course be seen again in the recording of this webinar available here.

Have any of the projects you have worked on had real fires and if so, how did the systems perform?

We don’t know of any real fires reported in the UK where we have these systems. We do know of a couple of fires in Holland where impulse ventilation systems were installed and the systems performed very well.  I think there was one fire in a multi-storey car park in Amsterdam and the car park was actually re-opened three quarters of an hour after the fire started because the impulse ventilation provided protection and the Fire Service got in there and fought the fire and put it out very quickly.

What is the installation shut-down period on detection of a fire before the fans go into extract?

Normally the main fans will go into extract mode as quickly as possible so the only delay is in the reaction time of the control system, not any intended delay.  For the impulse fans, there is no set time, it depends on the design and layout of the car park and is normally agreed in conjunction with the Fire Service or Building Control, typically in the region of 2 – 5 minutes.

Where did the ‘6 air changes’ rule originate from?

It is something that has been in Building Regulations for a long time.  I doubt to be honest if anybody really knows what the origin of it is, although somebody in Government might, but I am afraid I certainly don’t.  When we have looked at doing designs based around a calculation of CO levels in car parks, it appears that 6 air changes is a safe value. I don’t think I have actually calculated anything that needs more than perhaps 4 but the calculations are difficult, and are dependent upon detailed knowledge of usage of the car park, so the 6 air change rate normally gives a sensible solution.

How does an enhanced system work differently in relation to increased flow rates and throttling down the inlet to protect lobbies in the car park?

I guess we’re talking  purely about enhancement to provide lobby protection.  What we would do for this is to position the impulse fans themselves - and also sometimes even the extract system as well - to ensure that, when we do the CFD, we can show that the pressure within the car park locally to the door to the lobby is lower than the pressure within the lobby and therefore there will be no tendency for smoke to flow into the lobby. We also need to show that the direction of air flow and the effect of the door opening itself does not work to funnel smoke into the lobby. It’s really a case of careful design of the combination of the layout of the lobby itself, the extract and the impulse ventilators to ensure that we get a system which will keep the smoke out.

The question mentions throttling the inlet to do that, but this is not commonly done. However, if you have a shutter over the car park entrance, there is no reason why you can’t partially close that to throttle the inlet down to reduce the pressure in the car park, if that proves to be necessary.

Must the attenuators on the extract fans be fire rated as well? If so what is the rating?

No, they don’t need to be fire rated unless they are within another fire compartment. If they are within another fire compartment they will be fire rated in exactly the same way as the ducting would be.  In the same way that normal galvanised steel ductwork is adequate within the car park then normally a standard galvanised steel attenuator is suitable as well.  The only thing we do is make sure that any sealants that are used are high temperature sealants rather than standard sealants.

Does each zone need to run in two parts?

If we are talking about a smoke clearance and day to day system then, if it is zoned, I suppose you would want to make sure that each zone runs in two parts, because if you have only got one fan in a zone and that fan fails, then you have lost the entire system.  If it is a smoke control system, then for whatever extracts you have, you need to make sure that you have got some provision for standby supply; so it is not just a case of having two parts, it is a case of making sure that if one fan fails you still have the full extract rate.

What are the acceptance criteria for velocity for approved Document B?

Approved Document B doesn’t actually have any acceptance criteria for velocity at all, it purely references air flow criteria.

How does BS 6164 influence the choice of system?

BS 6164 is a standard for fire protection in tunnels. It is not normally applied in car parks or any roadways leading to them.

What secondary power supply is required and acceptable?

Generally the mains supply will be the primary supply and the secondary supply is almost invariably a generator supply but, depending upon what your local authorities will accept, sometimes it can be a second mains supply. Obviously if you have got mains supplies from a totally different secondary source then that’s much better than just having two supplies from where you enter the building, but generally a generator would be the preferred solution.

What are the criteria surrounding the location of the extract point? For example sometimes in car parks these might be disguised under seats, near apartment terraces etc.

In terms of the extract point, the important thing is that the extract location should be somewhere which won’t risk smoke from that extract making it difficult for people to escape from the car park.  So, it doesn’t matter if it’s in a courtyard, doesn’t matter if it’s under a seat, doesn’t matter if it’s near an external terrace, as long as it is not going to prevent people from safely escaping in case of a fire in the car park, and to be honest we have put extracts in all sorts of different places. So, as I say, the main criterion is to prevent the smoke blocking any extract points. The other issue is making sure that the car park itself is kept clear, so we do want to ensure that our extract point, wherever it is, is not too close to our inlet points to the car park, because in that instance we are risking re-circulation and could actually draw smoke or fumes back into the car park.

If you missed the webinar, you can now watch a recorded version here. You can also keep an eye out for future Colt webinars by looking at our webinar calendar.