The debate: what is it all about? 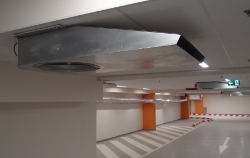 Over the last few years there has been a lot of discussion about use of inverter control for smoke extract fans. This has centred on concerns that the changing characteristics of the fan motor as it heats up may cause inverter failure. Inverter manufacturers do offer models with an “emergency mode”, where the majority of protections are disabled with the intention of allowing the motor to run to destruction.

There is however no current test in BS EN12101-3 (the standard for smoke extract fans) for inverter controlled fans and there is no agreed definition or standard for “emergency mode” for inverters. The next edition of BS EN 12101-3, when CEN gets its act together and finally publishes it, will include a fire test for an inverter controlled fan, so hopefully this debate will finally end.

In the meantime however, inverter control can still provide significant benefits for design of car park ventilation systems.

How do we ensure safety in case of inverter failure?

BS 7346-7, the standard for smoke ventilation of car parks, has something to say about inverters. It allows their use, but requires a separate inverter for each supply and extract fan and states that “The mode of control in the event of an inverter failure should enable the fan to run at its maximum speed”. This sounds simple enough, but without standards or test data, how can we be sure this is achieved? At Colt we take the safe, conservative approach and provide a contactor bypass for emergency use. This is not the cheap option, but it is reliable and safe while we wait for standards to catch up with current practice.

At first glance the benefits of inverter control may seem slim. In terms of cost the obvious balance is between the cost of a single speed fan against a slightly larger, 2 speed fan and the cost of the inverter control against the cost of 6 core instead of 3 core fire rated cable. This doesn’t seem much and might even increase costs, but upon reflection there are other benefits:

Less power, less space and lower running costs? Looks a winner to me as long as the right safeguards are in place.

We have a recorded webinar on car park ventilation that you can watch here. This webinar is CPD accredited, so after watching you will be able to claim a CPD certificate.