Regulations are changing for the better – you need to understand them.

The Government has produced its consultation document on reforming building regulations relating to fire. This is in the wake of Dame Judith Hackitt’s report, which was a response to the terrible tragedy at Grenfell Tower. 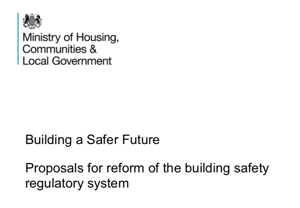 The document is called ‘Building a safer future: proposals for reform of the building safety regulatory system’ and consultation closed at the end of July. We can expect the document to move into law substantially unchanged, so it is worth considering now what it means. The expected timescale is that a draft bill based on this document will be put before parliament in Spring 2020, and it will become law in 2021.

* It sets out the concept of “dutyholders”, who have clear responsibility for the building’s safety during design, construction and operation. This is an excellent idea, since the document lays out ways of ensuring that they are competent. But why restrict this to high-rise buildings? Fire can be hugely damaging in all buildings in which people live. It would make sense to extend the dutyholder regime to lower apartment buildings. And we should look at extending the role of the dutyholder to other building types as well – recent fires in distribution centres, for example, show that this is needed.

* The document also sets out the role of an accountable person. This is the person who will have direct responsibility to residents for ensuring fire safety during the time that the building is occupied – effectively throughout its operational life. The accountable person will not only be responsible for the safety of the building, but also for keeping residents informed of the safety procedures and protocols that are in place.

* Residents will not only be informed – an essentially passive process – they will also have more of a say in the fire-safety of their buildings. Tragically, at Grenfell, residents had warned about the risks but were not listened to. The new legislation aims to ensure that this will not happen again. Residents will be able to request information and the accountable person must give it to them unless there is a strong reason not to do so. This change gives residents more power and also more responsibility.

* Taking action when buildings do not comply with building regulations will be made easier. Local authorities will have more time to serve enforcement notices, and individuals will be able to claim for damages if they have suffered harm and a building has not met building regulations.

* There will be a new role of a building safety regulator to ensure that the new regime is enforced robustly and effectively.

* The regulator will have the power to take quick and effective action, typically imposing fines. New criminal offences should ensure that those responsible for the building during design, construction and operation can be held accountable for any shortcomings.

These are important changes. Doubtless there will be unintended consequences. No solution is likely to be perfect, particularly with fire safety, where so often weaknesses in detail can mean the difference between correct and incorrect installation and, in the worst circumstances, between life and death. But they are to be welcomed.

For all those involved in fire safety in buildings (including some who currently are scarcely aware of this role) it is essential to understand both the principles and the detail of the changes that are likely to happen. We will be writing more about this topic in the future.

If you have any concerns about whether your smoke control systems are currently meeting government regulatory standards, contact us.