Smoke control system design and installation. Common mistakes and why it is vital to avoid them.

In my last blog post I wrote about the government’s proposed changes to the Building Regulations as they relate to fire and broadly welcomed them (the main concern is that the very sensible measures proposed for high-rise residential buildings should also be applied to their shorter cousins).

But principles are only as good as the way that they are applied, and in terms of fire protection, and of smoke protection in particular, the devil is certainly in the detail. If these systems are to work properly they have to be designed properly, installed properly and maintained properly. Sadly, this does not always happen. 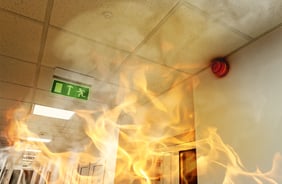 I have seen too many mistakes of all kinds. On high-end blocks of flats, architects like to specify full-height doors including to the stair well, but smoke can usually get around these.

There have been cases where the smoke extract shaft as designed was tiny, and we had to model it to show that smoke would go up the main staircase. In this case we had to reverse engineer a solution to ensure that it was safe.

The whole point of fire doors is that they stay closed to protect in the case of a fire. However, we continue to see projects where these are used on smoke shafts and held shut by magnetic closers – if the electricity goes off in a fire, all the doors will open, allowing the fire to travel through the building.

Similarly, in a block of flats in Leeds, there has been public reporting of an incident where the owner had taken the fire closer off the door, and as a result, a fire that should have been contained spread through the building. A significant contribution came from the failure of the smoke control system to stay closed on what should have been unaffected floors –poor design, again.

If there is a shaft that has been designed for smoke extraction, it is vital that it is well built and that the fans are temperature rated. And it is vital to deal with any possible sources of leakage – if air can leak from the shaft, the design could be compromised, but so could the fire resistance.

We also hear a lot about the importance of installing sprinklers, and they often have a vital role to play in ensuring safety during a fire. But they cannot do the whole job. For instance, in the disastrous fire at Grenfell, because the fire spread on the outside of the building, sprinklers  may not have been effective. In the fire at Torch Tower, Dubai Marina, the fire was so widespread that the sprinklers ran out of water in just a few minutes.

There is a great deal that can go wrong in design terms and during construction. Everything may, superficially, look right but when it is put to the test in a real fire, the weaknesses will become evident, resulting in damage or even in death. That is why we are pleased that the proposed changes to the building regulations introducing the role of the dutyholder, who is responsible during the design and construction of the building. By making this the specific responsibility of one person, and making the duty holder accountable, there should be no buck passing. Let’s hope that, if our buildings are unlucky enough to suffer a fire, they will perform as well as they were intended to.

To make sure that your systems will work as intended in the event of a fire, book a free building survey with your local representative today to get your systems checked.