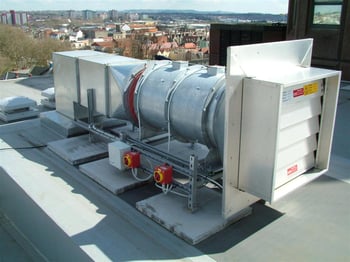 In this blog, we aim to provide guidance on UK legislation with particular emphasis on the regulations in England that form the basis for smoke control design. Since local government was devolved, each nation state has produced its own guidance framework for construction. In England this is defined by the Building Regulations 2010 and the Approved Documents – specifically Approved Document B for Fire Safety. In Wales it is similar, except the Approved Documents are specific to Wales. In Scotland, the requirements are set out in the Building (Scotland) Regulations 2004 and the supporting guidance can be found in the Building Standards Technical Handbooks – Section 2 for Fire Safety. Finally, for Northern Ireland, it would be the Building Regulations (NI) 2012 supported by the Technical Booklets – E, for fire safety.

Firstly, The Building Regulations set out the basic requirements that need to be achieved for any new building – from a fire safety perspective these are broken down into:

Then, there are the Approved Documents, which provide more detailed guidance as to a sensible way of achieving those requirements. Within Approved Document B (ADB) Fire Safety, there is a set of prescriptive requirements that can be met. Alternatively, there is the option to use fire engineered approaches to achieve the same level of safety if this is not suitable.

ADB recommends smoke control systems in multi-storey buildings to protect the stairs. It does that either directly by setting requirements within the Approved Document or by reference to BS 9991 for residential buildings or BS9999 for all other building types. It covers both residential escape stairs and fire-fighting stairs in commercial buildings.

Types of smoke ventilation systems that are approved: 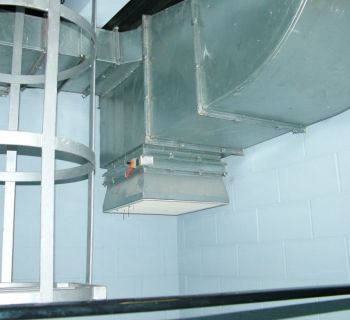 Essentially glazed casement or louvred ventilators which automatically open in case of fire, allowing smoke to be vented from the building. These help to keep stairs and common escape routes clear of smoke in the event of a fire.

With a natural shaft, there is a vertical smoke shaft through the building with smoke control dampers leading into them so that if a corridor doesn’t actually extend to an outside wall then ventilation is achieved through the shaft.

In general, ADB treats each of these as being equivalent. Although technically they are nowhere near equivalent, they are treated as equivalent in terms of meeting the regulations.

ADB does not actually refer to mechanical shaft systems at all; since mechanical shaft systems really started coming into use in about 2003, but in practice they are considered as fire engineered or ‘performance based’ systems. However, because they have been in use now for around 10 years and are in common use, they are effectively accepted as being equivalent to the standard requirements, even though they are not actually within ADB.

The Legislative Framework Part 2: The Standards

Various Standards apply to smoke control and pressurization systems as well. ADB itself doesn’t directly refer to BS 9999 in their entirety. So, we are in this slightly odd situation where our regulations actually refer to a specific part of a Standard, yet designers are expected to design completely to the new Standard, rather than being a mix of the ADB and BS 9999.

BS 9991 has recently been updated and is currently going through a comment review procvess. However, if it technically stays as it is, tany residnetila building over 18m will only be pemtiied to have a single staircase if it is pressurized. There are one or two other situations where BS 9991 recommends pressure differential systems, one as an alternative to separating a dead-end corridor with a fire door, and another to allow a single stair to extend down into basement level without being separated.

Looking at the Standards for the systems themselves rather than the general fire safety Standards, the Standard for design of pressurization systems / pressure differential systems is BS EN 12101-6, which is a European Standard that is accepted within the UK. There is no Standard for shaft type systems, whether they are mechanical or natural, although there is a guidance document provided by the Smoke Control Association for residential buildings available as a free download from www.feta.co.uk.

BS EN 12101-6 sets out the requirements for pressurization for six different classes of system. Five of them are in use in the UK and the sixth one was put in specifically to meet an Austrian requirement. In practice, only 2 classes are used regularly in the UK: Class A, which is used for residential buildings, and Class B, which is used for commercial buildings where we have fire-fighting stairs.

If we look at the requirements for these, Class A is generally pretty simple: a pressurization level is required when the door is closed and a velocity through an open door is required when doors are open. This velocity is 0.75m/s, so fairly low.

A Class B system has extra requirements, in that the stair, the lift shaft and the lobby have to be pressurized, whereas with a Class A system there is the choice of which areas to pressurize. In addition, a higher velocity requirement with a lot more doors open has to be met. What that basically means is the size of the systems are significantly different.

While with Class A there is probably typically a flow rate of between 3 and 5 m3/s, with Class B this is probably between 15 and 20 m3/s, so everything is on a much bigger scale.

To complicate things further, EN12101-6 has also been revised and split into two, part 6 will cover the equipment testing and specification, Part 13 will detail the design and application of such systems. These are expected to be re-published this year; when that happens, the changes are quite significant. For example, the number of classes has been simplified to two and the pressures/velocities simplified. It is also less prescriptive, leaving it to the designer to decide the areas that are to be protected and which are not.

If you need help navigating the complex world of legislation surrounding smoke shafts and pressurization systems, talk to a Colt expert today. Our designers and technical consultants will ensure that your system is fully compliant, safe and operational.

Conor Logan is Associate Technical Director of Colt UK, Smoke and Climate Control Division. Conor designs innovative smoke control and HVAC systems and was Chairman of the Smoke Control Association for over 9 years.